My brand new full-length play, Healer, will be presented as a semi-staged reading on January 6th at 78th Street Theatre Lab by The Drilling Company. Healer was the first expansion of Drill Co.’s “Discovery Series” model (this expansion was originally suggested by me incidentally), which takes a play in its infancy (or various stages of development) and puts it through a series of weekly rehearsals with actors and a director, culminating in a reading of a new draft (or sometimes a first draft) of the play for an audience in a theatre.

In the case of Healer, the play started as 22 pages of new material in late November of ’08 and after 5 consecutive weeks of meetings and a little holiday break for the playwright to finish the play, a solid draft of a brand new full-length was created! The workshop was directed by Rob A. Wilson. I must say, this was the most fun I ever had writing a play. Much less isolating to work with other creative people during the writing process. I’ll always do it this way in future if I can. This play is dedicated to my buddy, Lisa Peart.  Below is the postcard that we made for the project, followed by a rehearsal photo: 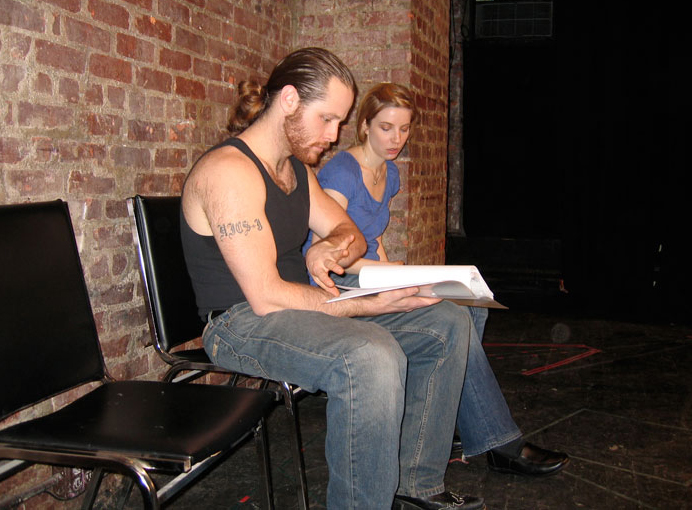 William Apps and Lisa Peart rehearsing for the Discovery Series reading of HEALER by Stephen Bittrich.