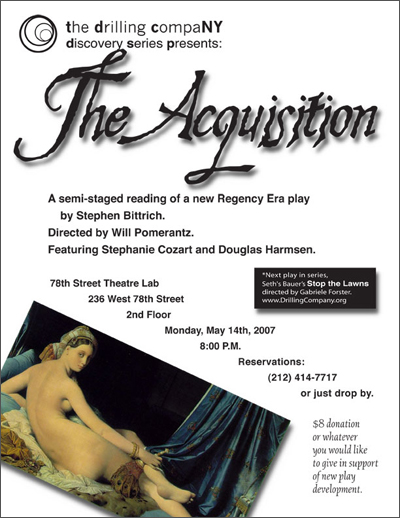 Flier from the reading of “The Acquisition” by Stephen Bittrich, a Regency Era play

As part of their “Discovery Series,” The Drilling Company will present a semi-staged reading of my new full-length Regency Era play, The Acquisition, directed by Will Pomerantz at 78th Street Theatre Lab (2nd Floor) on Monday May 14th, 2007 at 8 PM.

The reading features actors Stephanie Cozart and Douglas Harmsen among others.

The best subway is the

train to 79th Street Station. This is a free event.  Donations welcome.

The “seed” of The Acquisition was a one-act called The Proposal, which was produced by The Drilling Company in June, 2006.  See earlier post about The Proposal.