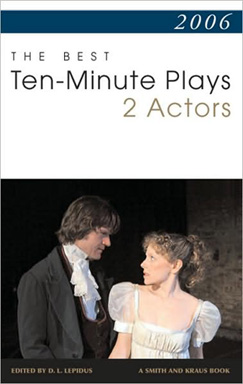 Not the first time and hopefully not the last, but I have a short play in a book that was released this month called 2006: The Best Ten-Minute Plays for 2 Actors. The book includes my short play, The Proposal (which also happens to be a key scene of a new full-length play called, The Acquisition).

Copies of the book may be had at the Amazon website.

That’s a production photo from my play on the cover featuring actors, Stephanie Cozart and Josh Foldy. The director of that production was Carol Halstead. (Photo by Fred Marco.)